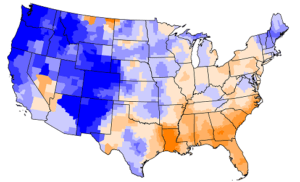 A core principle of psychology is that individual attitudes influence individual behavior. Consequently, psychological data on intergroup bias have often been collected through small, controlled experiments in laboratories on university campuses that focus on the individual as the unit of analysis. However, the internet now facilitates the collection of massive amounts of data from diverse populations and locations. In my research, I rely on such large datasets to aggregate the responses of individuals into regional estimates and, in conjunction with other sources of data, predict outcomes of consequence. By studying biases regionally, I can investigate outcomes that might be relatively infrequent or otherwise difficult to study in the laboratory. This line of research is high in ecological validity, and at the same time is positioned to advance social cognitive theory. Specifically, my colleagues and I propose a new theoretical perspective that conceptualizes regional intergroup bias as qualitatively distinct from individual intergroup bias (Calanchini, Hehman, Ebert, Esposito, Simon, & Wilson, 2022). Whereas responses on individual measures of intergroup bias are generally interpreted to reflect the influence of culture, individual differences, and measurement error, we argue that aggregation cancels out individual differences and measurement error, leaving regional estimates of intergroup bias to primarily reflect culture. This theoretical perspective dovetails with a related project, in which we provided the first empirical evidence of construct validity for racial bias operationalized regionally (Hehman, Calanchini, Flake, & Leitner, 2019). Based on the responses of nearly 2 million American internet participants, we showed that regional racial bias corresponded with theoretically-relevant outcomes (i.e., predictive validity) but not theoretically-irrelevant ones (i.e., discriminant validity). Additionally, individual-level implicit measures are often criticized for their low retest reliability, but we found that regional estimates of both implicit and explicit racial bias demonstrate acceptable levels of retest reliability. Together, this theoretical perspective and validity evidence helps to situate a growing body of research relating regional intergroup biases to outcomes of societal importance. For example, my colleagues and I found that American police were more likely to use disproportionate lethal force against Black people in regions where White residents demonstrate stronger implicit associations between Black people and threat (Hehman, Flake, & Calanchini, 2018). Importantly, we did not measure the racial biases of police who used lethal force, or even of police more generally. Instead, these findings highlight the relationship between the beliefs of communities and the behavior of individuals who live and work in them.

Nearly a century of psychological theory and research indicates that behavior is a function of both the person and the environment. Based on this perspective, we tested the gay migration hypothesis, that lesbian, gay, and bisexual people move from places that are not gay-friendly to places that are gay-friendly (Esposito & Calanchini, 2022). Relying on data from a sample of >1 million internet participants, along with experimental data from a laboratory sample, we found converging evidence for person-environment fit as a function of sexual orientation and sexuality attitudes. Lesbian, gay, and bisexual people generally migrated from places low in gay friendliness to more gay-friendly places, and their own sexuality attitudes played little role in their decisions. In contrast, straight people with pro-straight attitudes migrated to places that were low in gay friendliness, whereas straight people with pro-gay attitudes migrated to places that were high in gay friendliness. This project dovetails with other work in which my colleagues and I used machine learning methods to identify relationships between structural and environmental features and a wide variety of intergroup biases (Hehman, Ofosu, & Calanchini, 2020). We found that human features of the environment (e.g., commute length; availability of mental health providers) and events in the environment (e.g., rates of premature deaths; rates of obesity) consistently predicted biases. Importantly, these data-driven statistical models predicted up to 62% of variance in regional intergroup biases, and predicted significantly more variance in regional biases than regional demographics alone. By adopting a regional approach, this line of work advances beyond traditional, individual-level psychological perspectives and highlights interconnections among intergroup biases, systems and structures, and important real-world outcomes.